Throwing a frog has to be one of the most exciting ways to catch a bass. Topwater in general is always fun, but working a frog along the surface and waiting for the bite adds even more fun. Frogs are also adept at fooling giant bass, and Bassmaster Elite Series pro Bill Lowen always has one ready when the conditions are right. He has an approach to catching more fish with them, and it comes down to having the right gear, using the most effective retrieves and also looking for out of the way places to throw his frog.

Lowen says he uses one frog rod whether he is fishing thick mats or walking the Poppin’ Furbit in open water. He likes a 7’2” medium heavy rod and says it gives him the perfect balance between power and performance. “You want something with a soft tip so you can work the frog however you want to, but you also need something with some backbone to get them out of cover,” he begins.

Another must for Lowen is a fast reel. “I use a 7.5:1 Lew’s Team Lite Speed Spool. So many of your bites are fast and violent, and you are really missing out without a high-speed reel,” he says. “I spool it with 50-pound braid because it is so much easier to work the bait. Some guys use 65-pound, but to me, that feels like jump rope, and I’ve never had an issue with 50-pound breaking.”

The great thing about fishing a frog on the surface is there is not a wrong way to do it. Lowen’s two most productive retrieves are a slow and steady cadence and then a more aggressive walking action where he keeps the bait in the same place for as long as possible.

“When fishing thick mats, I’ll use the slow and steady retrieve to allow the back end of the Furbit to dip down and push the grass,” he says.

Walking a frog is a skill that all anglers should master according to Lowen. “That is my number one tip for frog fishing. If you can get that frog to walk in place for as long as possible to keep it in the strike zone you will without a doubt get more bites with it,” he says.

The Furbit’s unique legs that are made of rabbit fur add to the appeal when utilizing this approach. “The legs are so much more natural than regular rubber or silicon skirted legs. Even wave and wind action will get the legs to move and look very natural, and you can see that every time you watch it on the pause.”

The choice between these two frogs is simple for Lowen. “I use the Poppin’ version in open water because it walks so easily. It has to be the easiest walking frog in the industry,” he says. “It’s so easy to walk that a kid or beginner can easily get it walking. But it doesn’t do nearly as well in grass because it has such a big cupped mouth.”

On the other hand, the original Furbit excels in the thickest cover you can find. “I reach for the Furbit anytime the grass is thick. It has a large belly weight that pushes down into the mat and makes a big disturbance,” Lowen has learned. “Most frogs do not weigh enough to move that grass and that is something that calls fish from deep in the cover.” 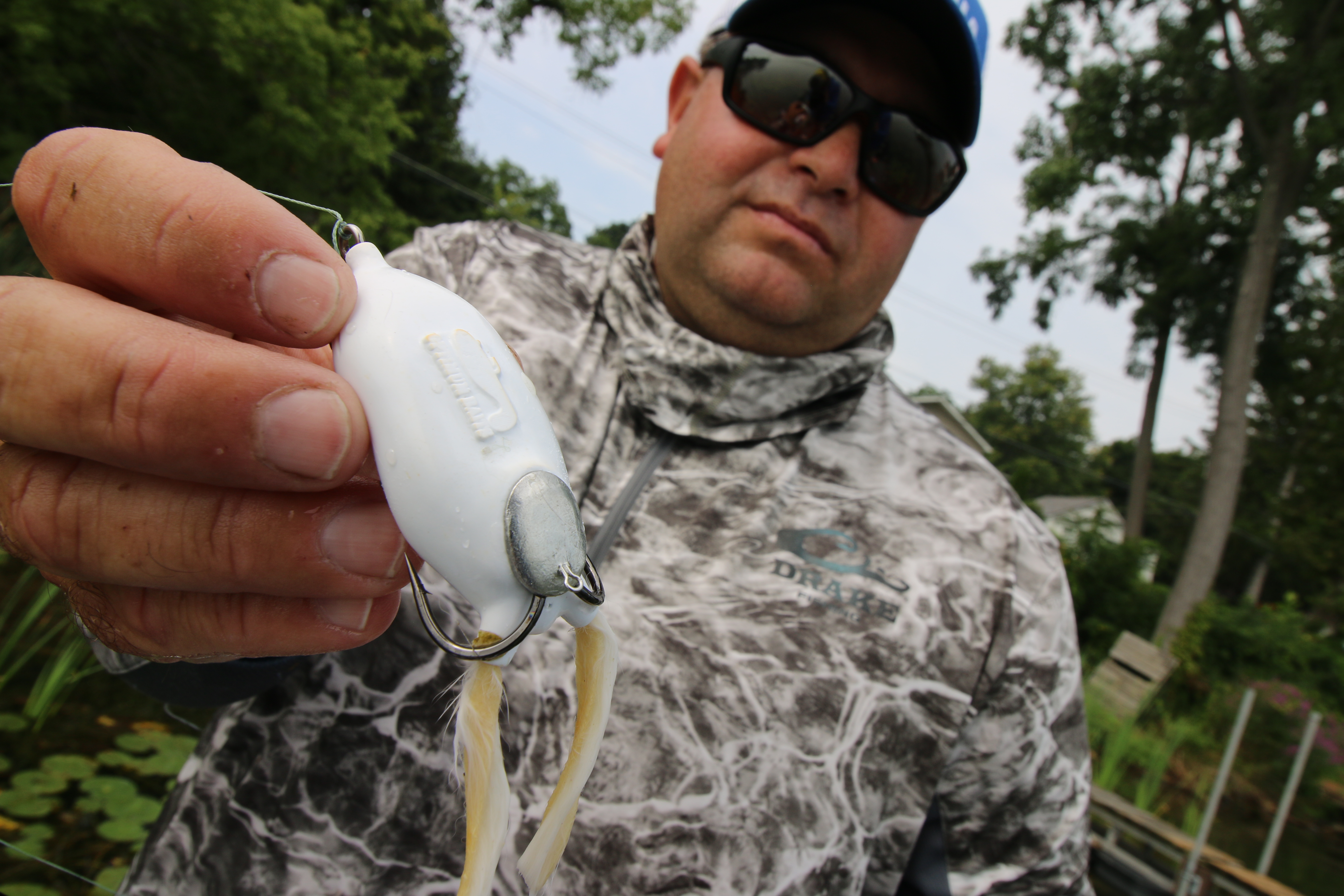 Lowen displays the large belly weight of the Furbit.

Lowen fishes the Furbit in all of the standard frog hotspots like lily pads, matted grass, cheese mats, and more but he also looks for some out of the way places to throw it.

“The biggest misconception about frogs is that you have to fish them around vegetation. They work great there, but I have had great success fishing them around flooded bushes, under docks and just by fishing them in open water,” Lowen says. “The great thing is you can cast and skip them into places that you can’t get a popper or walking bait with trebles. If you can get a topwater bait far into cover where bass are not accustomed to seeing baits on top, you can do really.”

Another of Lowen’s favorite froggin’ spots is around chopped up vegetation. These “chop mats” as Lowen calls them can be created from heavy boat traffic or in some regions it is from weed control organizations. Lowen likes these because they offer the right thickness of grass and are often pushed up into areas along the bank from wind and waves. 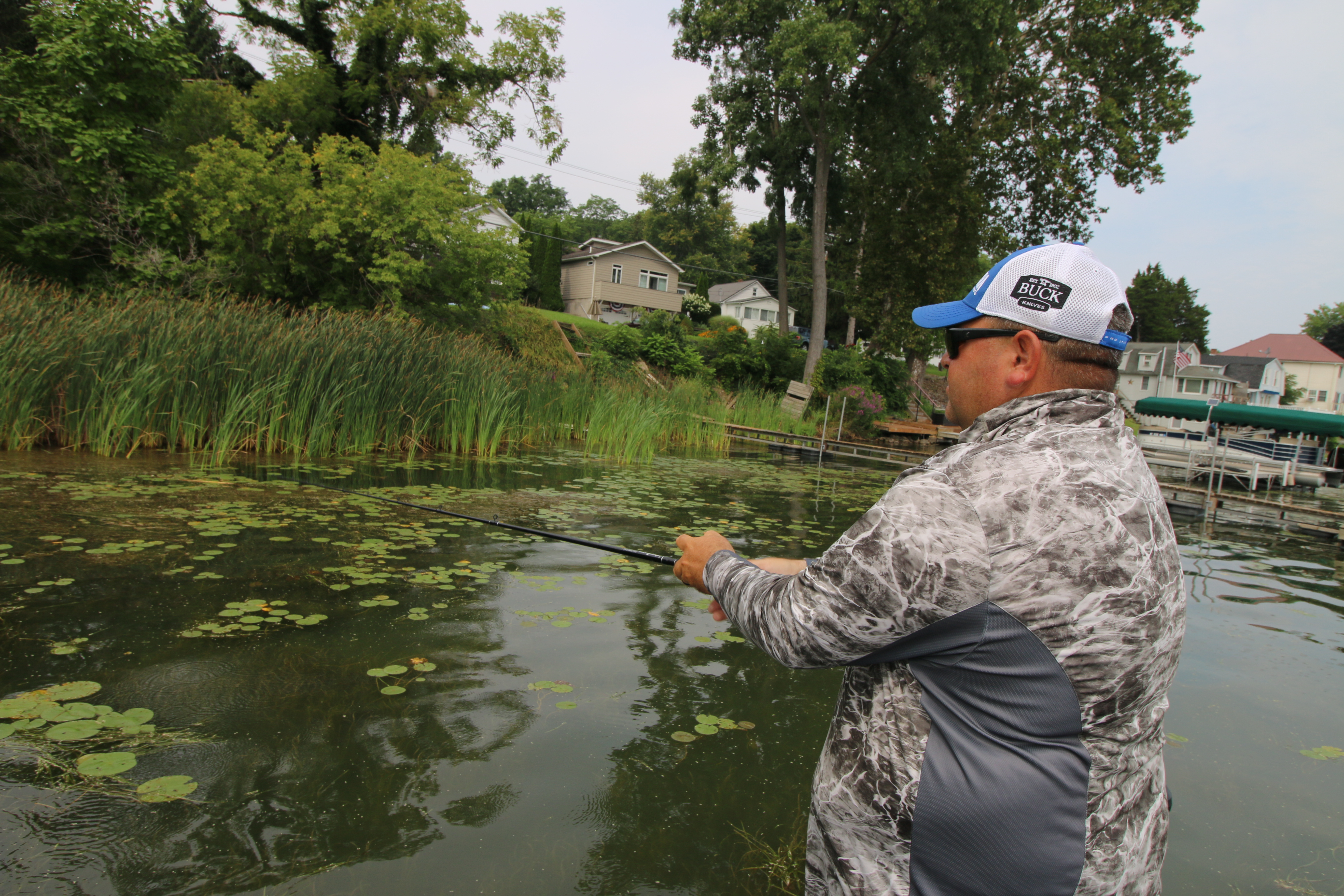 Lowen works a section of lily pads and “chop mat” that has blown into the bank.

Anglers can get creative with frog modifications and add rattles, bend out hooks or any number of other tricks, but for the most part, Lowen fishes the Furbit right out of the package.

“Once in a while I will add a rattle to the frog if I am fishing thick cover, but usually I get it out of the package and trim the legs a little and start fishing it,” he begins. “The cool thing about the Furbit is that they come with a blade attached and you can leave it or remove it depending on where you are fishing. If I am in open water situations, I’ll leave it on, and that gives it a little more flash.”

Lowen is about as simple as they come when it comes to color selection. “They have tons of great colors, but I usually narrow it down to something dark and then something with a white belly. They will usually eat one of the two.” When fishing a white frog, Lowen likes the White Ice color and for darker colors, he is a fan of Midnight and Bull Frog.

Fishing a frog does not just have to be about fishing grass. Lowen has discovered that they are an excellent choice in many situations and that keeping things simple when it comes to gear, colors, and retrieves allow anglers to focus on making more presentations and catching more bass.