The thought of swimbait fishing can be intimidating to some anglers. The big baits require upsized gear and a different approach to fish them correctly, but maybe it doesn’t have to be that way. Noted big bass hunter Butch Brown is one of the best in the world with a swimbait and his way of fishing baits like the Optimum Baits Thumper Tail is remarkably similar to the way many bass anglers fish traditional reaction baits.

Brown fishes a wide-range of swimbaits and is one of the anglers who helped turn the Deps Slide Swimmer 250 glide bait into a must-have for fans of big baits. Since glide baits are visual lures, he admits that they are not the way to go when the water is stained or dirty. These situations are a place where when he picks up a Thumper Tail. 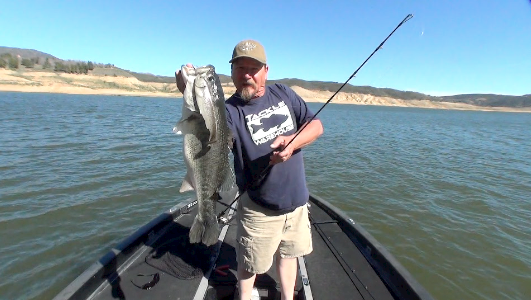 “It puts off way more vibration, and if the water is a little murky, you need some extra help. The thump that these baits provide is key, and you can feel it as you are bringing the bait in,” he says. “They have more thump than a Huddleston, which I’ve caught some really big ones on, but not when the water is stained. Those do not have as much vibration and are a more visual big bait.”

How Brown likes to fish the Thumper Tail is much like fishing a spinnerbait, just with a much bigger bait. “I’ll either use a slow wind or slow-roll it, just like you would with a spinnerbait,” adds Brown.

He will pay close attention to his electronics to see what depth range the fish are relating to and will make sure his bait is in the strike zone. “If you notice the fish are all down in the 15-20-foot range, you want to keep the bait right there.”

While Brown often retrieves his Thumper Tail like a bass angler fishes a spinnerbait, he approaches it much like someone moving down the bank with a crankbait as he parallels the shoreline. 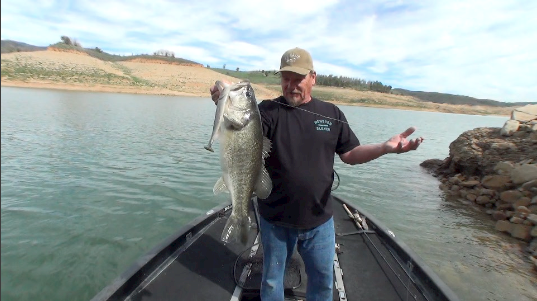 Butch with a Thumper Tail bass caught working down the bank.

“I like to stay about ten feet off of the shore and cast parallel to the bank; it is no different than fishing a crankbait. You are searching until you find the fish,” says Brown. “It helps to know the area you are fishing so you can follow the contours and fish a specific depth zone.”

Depending on the depth he is fishing, Brown alters his approach as he moves down the bank. “I usually don’t want the bait banging into the bottom the whole time and usually keep it six inches, or a foot or two off of the bottom to avoid the rocks and stickups,” he shares. “The fish seem to bite the Thumper Tail on the wind when it is moving and that is what makes it such a good search bait.”

When approaching a point, he will do one of two things: cast across the point or fish the bait uphill. “If I locate fish on points, my first step is to cast over it and bring it back. After that, I’ll get tight to shore on the point and cast out to the end of the point,” says Brown. “By working the bait uphill, you can give the fish something they are not used to seeing as much.” 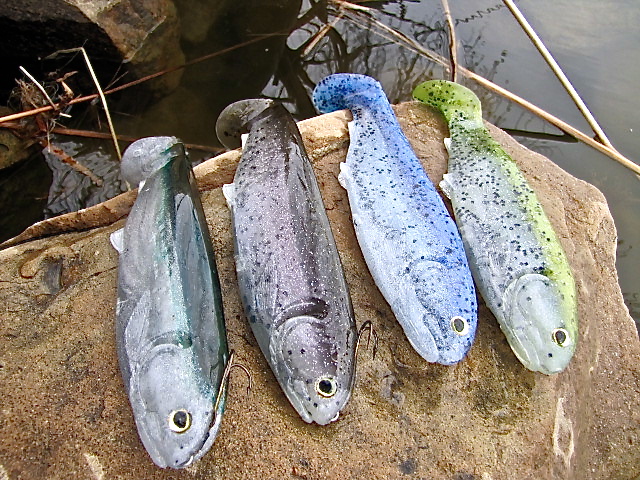 A few of the many colors offered.

The Thumper Tail comes in a variety of colors from the trout imitators to Pearl White. Each has their time and place, and Brown adjusts which one he uses based on water clarity and the tried and true method of matching the hatch.

For stained or dirty water, he likes Light Hitch because it stands out with a bright stripe down the side. Other times he prefers to have a natural color like Saiko Trout or Dark Trout when fishing cleaner water.

The Thumper Tail in Light Hitch

“All of the colors are for different conditions, and I like to keep track of what the fish are eating and try to match it. If I notice that the stocked trout are getting chased a bunch, I like the Lit Up Trout because it has a lighter look,” he says. “I learned a long time ago from tuna fishing that the best baits you can rig up are the ones that are lighter colored and stand out, those are the lively ones. Those active sardines and anchovies in the tank get bit right away.” He feels that the same principle applies to bass chasing their next meal as it does to tuna offshore.

The Thumper Tail comes in two different sizes, and even though Brown is known for throwing large baits, he is a fan of the smaller version when conditions call for it. 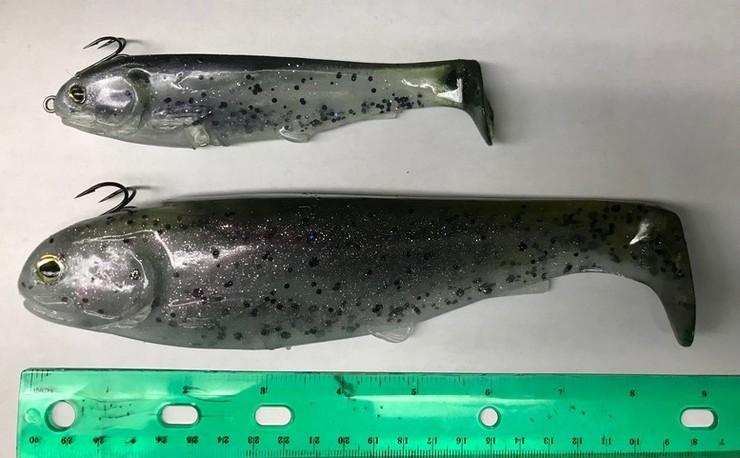 Both sizes of the Thumper Tail

“You are going to appeal to bigger fish with the 9” bait, but the 6” is a great summertime bait. I also use it a lot when I go to lakes that don’t have many bass over six pounds,” he says. “The smallmouth and striper chew it, too. It is a fun bait to fish, and you definitely get more bites with it.”

Most of the time, though, he is sticking with the original Thumper Tail that comes in at 9” long and weighs over five-ounces. It is a true big-fish bait and has accounted for many of them over the years.

Butch Brown has few equals when it comes to throwing big baits. His numbers of double-digit bass are legendary, and he has spent years dedicated to trophy hunting. The Optimum Baits Thumper Tail was his design, and it fits a niche in the swimbait game when a little thump is needed to get bit.