The Boom Boom line of swimbaits continues to evolve with three different versions available, multiple size options, and a growing list of colors. At first glance, the swimbaits may appear to look similar, but they all have their subtleties in how they swim, and each fits different scenarios.

Professional angler Fred Roumbanis, aka Boom Boom, was the brainchild behind this series of swimbaits and said he has a reason he chooses to use each of the three baits: the weedless, rigged, and new line thru version of the lures that bear his nickname.

Fred shared his approach to fishing each of the three baits, where he picks one over the other, and also how he fishes them.

Even though the baits look similar, Roumbanis says all of the actions differ. “They have a similar action, and all have a nice head shake, side shimmy, and tail pump,” Roumbanis begins.

“I have learned that you can get a little bit more of the head shake with the rigged version, and I also feel like the Line Thru has a slower action,” he says.

Most of the time a steady retrieve is all you need to catch fish on any of the three versions. What Roumbanis does is twitch his handle periodically to give the bait a slight stutter. He will also mix in quick bursts of faster or slower retrieves to mix it up.

Here he breaks down a little more about the different baits and how he fishes them.

As Roumbanis mentioned, the rigged version takes a slightly different approach to get it to swim just right, but he says it can be deadly.

Roumbanis with a fish landed on the Rigged Boom Boom.

“The first thing I do after I cast the bait is to pop my rod a little to get it to start swimming properly before I begin my retrieve. You want to fish this bait on a semi-slack line during your to get it to swim right. It also takes a little more boat control and paying attention to what your bait is doing at all times. The other two are pretty simple, and you can cast and retrieve at any angle,” adds Roumbanis.

Fred generally likes to fish the rigged version in clearer water without much cover that the bait could get hung up on.

It goes without saying that this bait was made to fish around grass and the weedless design also helps open up swimbait fishing to any cover you find.

Besides weeds, Roumbanis likes this version because of how well it skips under docks and other overhanging cover. The weedless design allows this swimbait to go where the other versions can’t. 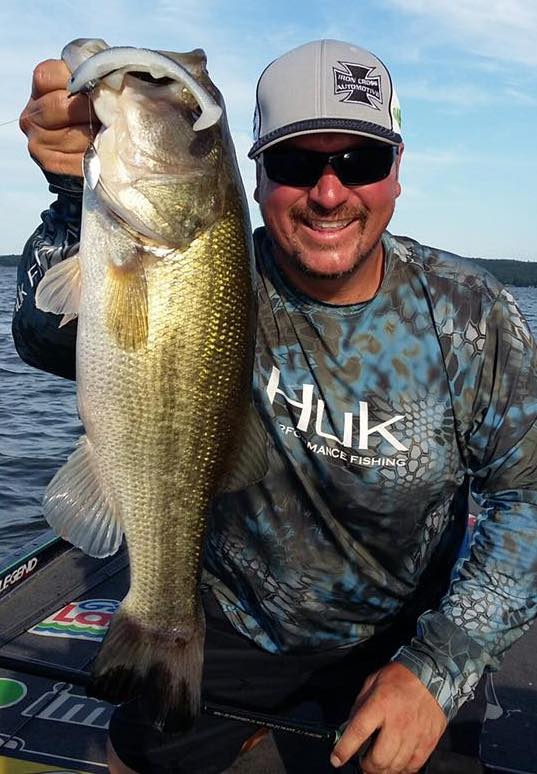 “I use the weedless version all year long, but it is excellent when the fish start to migrate to shallow water during the spring. I’d say water temperatures around 52-degrees is the first time I start to use it and when it hits that 55 to 56-degree mark, it is excellent,” he says. “When I am fishing shallow water with the weedless version, I like a fast 8.0:1 reel because they hit it and come straight towards you and you need to catch up to get a good hookset. It’s so much fun.”

One of the biggest questions about this bait is in regards to hooks. A belly-weighted hook is the way to go, and there are several on the market that works well. Roumbanis prefers the Hayabusa 958 Wide Gap Screw Lock Weighted Hook. They offer it in many sizes, but the 7/O and ¼ oz. version is ideal for these weedless baits. He changes the screw lock that comes on the hook for an Owner CPS Centering Pin Spring due to its ability to hold the bait better and for easier rigging.

This is the newest addition to the family and borrows the design from several popular Optimum Baits swimbaits. The bait features an insert to slide your line directly through the bait and connect to a treble hook, and it offers many benefits.

As a fish is hooked, the bait slides up and down the line to prevent fish from using the bait as leverage to throw the hook. It also helps to preserve the soft plastic and allow for more fish catches on a single bait. 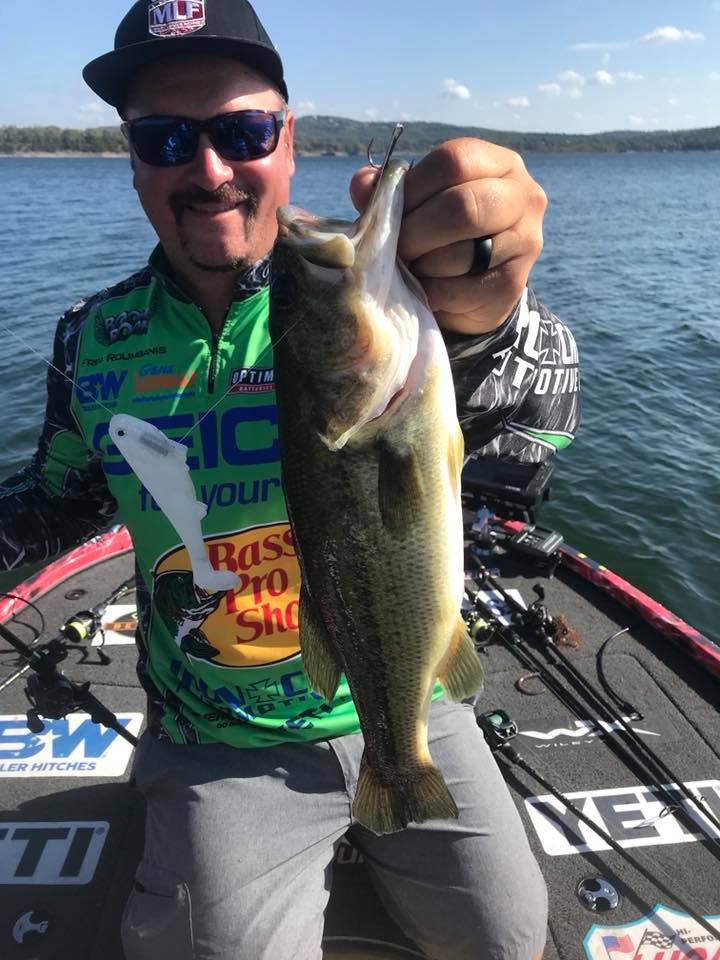 Roumbanis relies on the Line Thru often during tournament situations.

Roumbanis was instrumental in bringing this technology to the Boom Boom swimbaits, and he feels this version is the most versatile of the three.

“It’s the easiest to throw, and you can just cast it out and reel it back in. You can also fish it just about everywhere. My kids love fishing the 4” bait and even fish it on a spinning rod,” he says. Most often, he is using either the 5” or 6” version, especially when the bass are eating bigger baitfish.

Even though beginners can fish it, the advanced angler can get it to do more. Roumbanis likes to alter his line size to adjust the running depth during the retrieve and will use anywhere between 15 and 20-pound fluorocarbon for the two bigger versions of the Line Thru Boom Boom. “Each time you go up a line size you can expect it to run shallower and stay closer to the surface.”

The Boom Boom family of swimbaits continues to expand and evolve. Now with three versions, there is a swimbait that will cover any situation you will find on the water.