To Pop or Not to Pop?

Optimum Baits makes two tremendous hollow-bodied frogs from the same family – the Original Furbit and the Poppin’ Furbit. Both feature rabbit fur “legs,” a dangling blade, perfect color patterns and a super-sharp 6/0 Owner double hook. The difference, as the name might suggest, is that while the original has a pointed nose, the latter has a concave face that bloops, splashes and spits.

California guide Randy Pringle typically has both on his deck “all the time from May through about November,” but he typically employs them in different fashions.

“The Poppin’ Furbit has one of the best side-to-side walking actions out there,” he said. “In open water, it walks extremely well. You can keep it in the strike zone for a long time. It’s also great when you want something a little more aggressive, like when there’s lots of wind or current. That pop will wake up your larger than average fish.”

The original Furbit the Frog, however, excels in the densest, heaviest vegetation you can find. “That triangular pointed head slides through the cover a lot easier,” he explained. 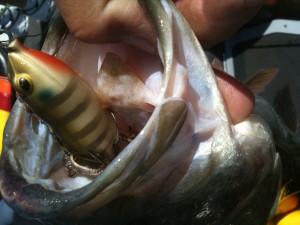 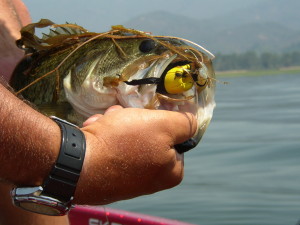 RANDY SAYS THAT PAUSING THE FURBITS FOR UP TO 5 SECONDS OR MORE REALLY ALLOWS THE FUR TO OPEN UP AND UNDULATE ON ITS OWN
CREATING MASSIVE BITES.

He’ll have both at the ready to attack the conditions that may change from minute to minute, and typically one will be light-colored and the other dark, the better to further narrow down the bite.

In either case, he wants heavy tackle to drive the hook past the plastic and into the lip of an outsized largemouth. In open water, he’ll typically fish the Poppin’ model on 50 to 65 pound test braid, although he’ll sometimes drop down to 25 pound mono if the fish are a little line-shy. In heavy cover, 65 pound braid almost always gets the nod. He prefers Spiderwire Stealth, “because it’s flat and doesn’t have that heavy coating like some other braids. With the coated style, if you make one little twitch, the bait tends to lunge forward.”

With both lures, he wants a rod with a lot of backbone, but it also has to have a soft tip. “You want a delayed action so when the fish sucks in that large bait, it’ll draw it into his mouth,” he explained. A Fenwick Elite Tech frogging rod usually gets the nod, although he still sometimes relies on his original Fenwick HMB 7’6” flipping stick.