Not just the biggest limit of Paul Mueller’s life.

Not just the biggest limit of the 2014 Bassmaster Classic. 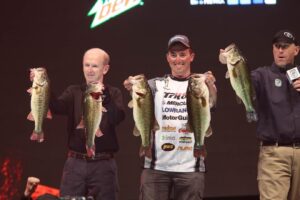 VanDam, Iaconelli and Skeet Reese didn’t come close. Even eventual winner Randy Howell, whose last day assault on Guntersville’s bass clinched the title, didn’t hit the 30 pound mark. Mueller set a record that is expected to stand for a while and the Connecticut fishing guide and member of the B.A.S.S. Nation did it as the result of some savvy reshuffling of his lure arsenal.

After struggling to a three-fish catch on the first day of competition on a lipless crankbait, he switched to a Chatterbait, a lure he rarely uses, and took the rest of the field to school. “It’s just one of those things,” he explained. “It was almost like a God-given instinct. I’ve learned to listen to that voice.”

While he enough fish hooked on Day One to win, his execution that first day was subpar, but Mueller took solace in the fact that he “found the right fish. To win a tournament, and especially the Classic, everything has to go right. It’s hard to fish clean for three days.” He also remained upbeat about the effect that all of the positive press has had upon his career. “It put me on the map and it helped my guide service out tremendously. I’ve been really, really busy since then.”

Most importantly, the hard charge that he made against the world’s best anglers showed him that he is capable of winning. Accordingly, he’ll head into this year’s B.A.S.S. Northern Opens and FLW Northern Rayovacs aiming to capitalize on the multi-faceted jumpstart that his Classic performance provided. “I really want to get back there,” he said. “My whole focus is to do it again. You fish the Classic with no other goal than to win. You don’t fish conservatively. You don’t practice conservatively.”

At Guntersville, his key adjustment was the change from a lipless crankbait to a Chatterbait, and he said that while he’s learned to trust his gut and switch things up on the fly, he still has “a lot to learn about shallow water fishing. It’s different down south than it is up north, even if you’re talking about the same types of docks and grass and flats. We fish a lot of deep, clear water where shallow is 6 or 7 feet. Down there, that’s deep.”

Regardless of how steep the learning curve, Mueller was pleased to report that his travels have taught him that there are certain lures he can’t leave home without.

• “No doubt the Reins Fat Rockvibe Shad is always a player in my boat. I can’t tell you how many big smallmouth I’ve caught on it. It’s great on a swim jig or on a Chatterbait, or just by itself.”
• “The Reins Bubbling Shaker is a lure I use whenever I need to fill out a limit. I call it my ‘Plan B’ bait. When I need points to make a championship, it’s something I turn to, whether it’s on a dropshot or a shakey head.”
• “The IMA Flit 120 has been really solid for me. If Champlain plays out this year the way I think it will, the jerkbait bite for big smallies should be on, and when that’s the case the Flit 120 is the best there is as a result of its erratic action.”
• “The Optimum Baits Opti Shad is a great finesse swimbait. Any time there’s a lot of pressure, or you’re around a lot of small baitfish like small alewives or yearling threadfin shad, you can’t beat it.”