Sticking to it in the Summer

For those anglers who still haven’t dared to throw the Ima Big Stik because it looks too imposing, California guide Randy Pringle has one thing to say: Get over it.

Pringle, who had a heavy hand in the bait’s design, said that while he uses this topwater when he needs a big bite, he’s caught enough smaller fish on it to know that the bass aren’t intimidated. “An 8-inch trout is like a gumdrop to a bass,” he said.

While he uses the Big Stik throughout the year, it’s coming into its own on his home waters of the California Delta right now, when big prey is abundant. “We just had another hatch of ducks,” he explained. “The swallows are nesting. The blackbirds are jumping around the weed lines. There are lizards on the rocks and if you stretch out the crawfish they’re at least 5 or 6 inches long.”

While the bass want big meals, they aren’t necessarily willing to chase it a long distance. That’s where Pringle’s tackle system comes into play. First, he relies on 20 lb. test Berkley Big Game monofilament. “It stretches a bit,” he said. “That helps it stay in the zone a lot longer than if you fish it on braid.”

He wields it on a Fenwick HMG 7’6” flipping stick with a quick tip. Unlike some other rods made for that purpose, it doesn’t have a “parabolic” action. Instead, it stays stiff up until the last 6 or 12 inches, at which point it bends. Again, that allows his tackle to do the work for him.

“The quick snaps you need to make require that quick tip,” he said. “You want the bait to lunge and snap back. If the tip of your rod is too stiff, the bait wants to jump out of the water or dive down.” While he prefers the Fenwick, he recognized that there are other rods on the market that fit the bill. Just be sure to stay in the 7’2” to 7’6” range. “The lure is heavy and you can throw it a mile, but you can’t just snap it like a spook.”

The key to his retrieve is to create a lot of commotion without a lot of forward movement.

His go-to patterns this time of year are the bluegill color and any of the shad imitators.

“They’re all extremely good,” he said. “With the spawning carp and all of the baitfish, there are fry everywhere you go and the bass are looking to eat them.” 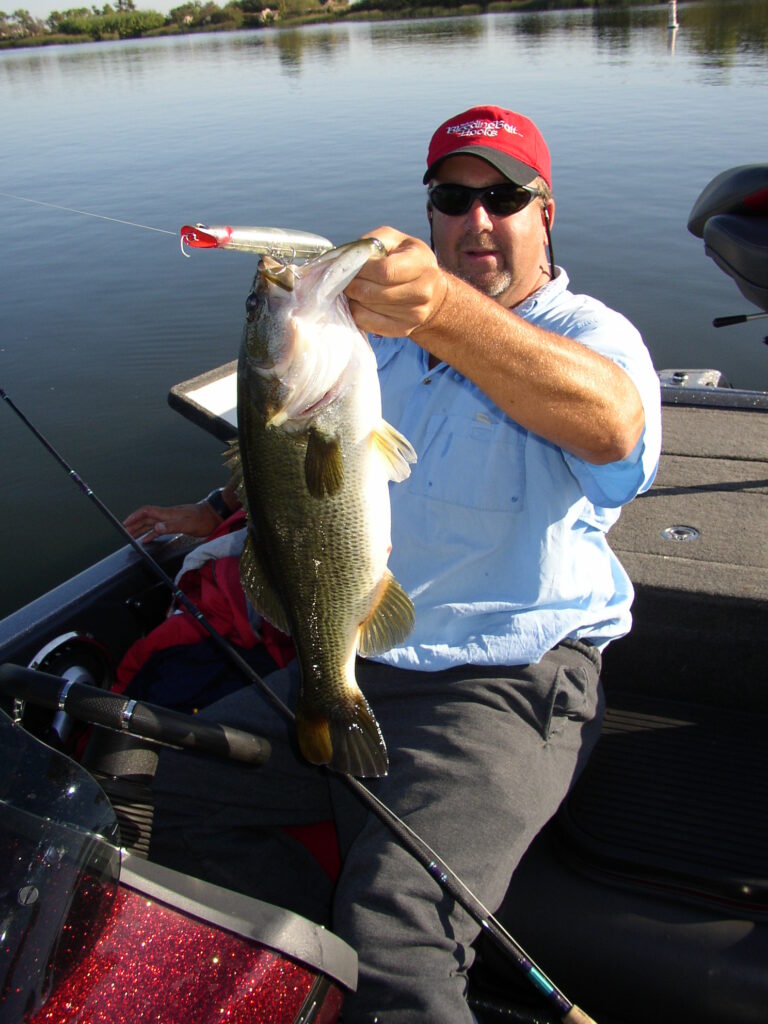