As summer transitions into fall, bass anglers increasingly encounter schooling action from bass who are putting on the feedbag and putting a scare into the local baitfish populations. When the fish start busting the surface, most weekend warriors attack them with power techniques like topwaters, big swimbaits and lipless crankbaits. Those lures have their place, but Elite Series pro Kurt Dove has found that day-in, day-out, nothing beats the 4-inch Optimum Opti-Shad fished on a 3/16 or ¼ ounce ballhead jig when the bullying bass gang up and corral their prey.

“I’ve been fishing it that way since I first discovered it at ICAST and with a medium to slow retrieve it’s perfect for fall,” he said. “Typically I target an area like a main lake hump or a creek ditch where the fish are holding to intercept the shad. They’re using ambush points so when the baitfish move into the area they erupt on them. The nice thing about the Opti-Shad is that you can catch them when they’re actively schooling as well as when they’re not.”

The lure’s multiple sizes and wide range of colors allow him to “match the hatch” precisely, and he believes that an accurate representation is most often the key to getting more and bigger strikes – or any strikes at all. “They’re keyed in on the bait moving through. If there are 3-inch shad utilizing the location and you throw a 5-inch swimbait, you may get a bite or two, but you shouldn’t expect to catch a lot. Look at the forage itself and try to match it as closely as possible.”

He uses a homemade jighead which he calls the “JAT” – “It stands for ‘Just a Touch,’” he explained. “That’s what the bite feels like, just like someone tapping you on the shoulder.”

Just because the strike is light doesn’t mean your hookset should be, though. “You hear about big swimbaits in the 5-, 6- and 7-inch sizes like the BLTs and the Top of the Line, how you have to wait to set the hook because they’re so much bigger. With this lure, you fish it with your rod at 9 o’clock, so you’re pretty much wound down, and by the time you feel them they have it, so you can put the steel to him.” The hard hookset is enabled through the use of a Powell 703 baitcasting rod, which he said has enough tip to give a little bit on the strike, but enough backbone to haul in fall’s heavy feeders. He usually pairs it with a 6.3:1 gear ratio baitcasting reel, but occasionally he’ll slow down to a 5:1 if the fish are a little bit less active. His line of choice is Toray Super Hard Strong 100% fluorocarbon, usually 12 lb. test.

“No matter which gear ratio you use, it’s important that your speed be consistent,” he implored. “The retrieve has to be natural, not herky-jerky.” That’s another advantage of casting gear over spinning, he said; it allows him to keep the retrieve speed as steady as possible. 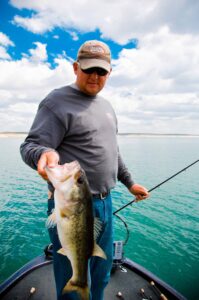